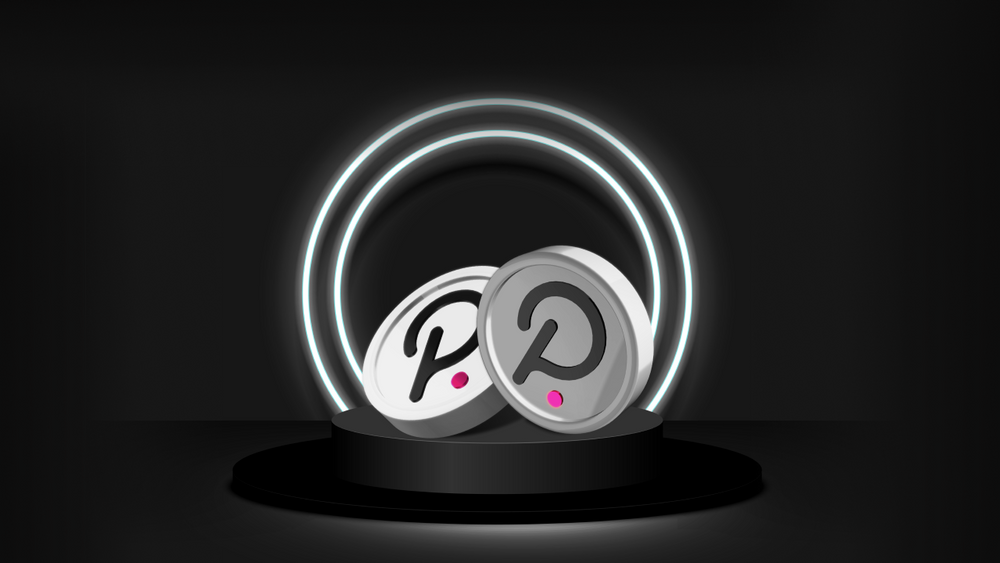 Scaling and operability - two buzzwords that are discussed way too frequently in the crypto space. One of the main challenges that do not allow mass distribution of the blockchain in the world is that blockchains practically cannot interact with each other. They lack what is called "blockchain interoperability" or in human - "compatibility". This is exactly what Polkadot is trying to solve!

Polkadot has quickly become one of the most popular and certainly one of the largest cryptocurrency blockchains in the entire industry.💥

It seems that the hype around Polkadot is only increasing, so we took the liberty of putting together a comprehensive overview to help those who are less familiar with the project and what it is all about. 📖📚📝🧠

The Polkadot story begins with the Ethereum project, or more precisely, one of the co-founders of Ethereum, Dr. Gavin Wood (PhD in Computer Science). He has over twenty years of experience as a software developer both, inside and outside the cryptocurrency space.‍

In January 2016, Wood left Ethereum to create a project that could meet the expectations that Ethereum had failed to meet 🛠️. He then founded the Web3 Foundation, which researches and develops decentralized technologies, including Polkadot.

Polkadot was first launched in May 2020 as a Proof-of-Authority (PoA) protocol. In PoA-based networks, transactions and blocks are verified by approved credentials known as ‘validators’. However, on June 18, 2020, the network quickly abandoned the Proof-of-Authority consensus algorithm and switched to the Proof-of-Stake (PoS) protocol which many of us know well. 🥰

Simply put, Polkadot is a blockchain protocol that connects different blockchains. It is a platform where existing blockchains are created or integrated and data can be exchanged between networks quickly and securely.

So how does Polkadot work? 🤔

The basis of everything - Relay Chain ⛓️ - is the base network of Polkadot, all blockchains are connected to it, which, by the way, are called parachains.

Parachains - short for "parallelized chain" - is any blockchain connected to Polkadot. There are also Bridge chains, which are designed to connect blockchains that do not use Polkadot governance protocols. For example, the well-known Bitcoin or Ethereum.

Last but not least, there are also Parathreads 🧵. Para what? Parathreads are similar to Parachains in terms of development and different from them in terms of economics. You can think of Parathread as a pay-as-you-go system where a project can deploy capital to access the security, connectivity, and scalability of the Polkadot blockchain for a specific period of time. In essence, Parathreads lower the barrier to entry for projects to gain access to the benefits of Polkadot’s shared security structure. With Parathreads, Polkadot becomes more accessible to projects that perhaps don't possess the startup capital or the community strength to bid for a Parachain slot. This essentially gives them the opportunity to join the Polkadot network and benefit from higher throughput functionalities, security, and liquidity.

By the way, Polkadot has a test network called Kusama, which is a testing ground for all Parachains, updates, and everything else that will later appear on Polkadot. It can be said that Kusama acts as a kind of sandbox for developers who want to test early versions of new Polkadot projects. In a nutshell, Kusama functions as an ecosystem for innovation, while providing a test network environment.🚀

But we'll talk about Kusama in a separate article, so be sure to watch this space. 👀

Now, for the roles and responsibilities. The Relay chain - the heart of Polkadot - is essentially a blockchain that uses a special subcategory of Proof-of-Stake (PoS) called Nominated Proof-of-Stake (NPoS). NPoS selects sets of validators, allowing nominators to choose the best validators based on past performance. This system is designed so that nominators can vote on which validators behave in a non-threatening manner.

The Polkadot consensus is supported by four types of network members:

What is the $DOT token for? The network's native token, DOT, performs three main functions:

⚖️ Governance. Essentially, DOT token holders have full control over the protocol, with privileges that on other platforms are reserved for miners. Determining the structure of transaction fees, decisions to change the protocol, adding or removing parachains, and so on. Polkadot's governance is based on the concept of weighted voting, where DOT owners vote their shares in referendums proposed by the community. All changes to Polkadot require majority approval.

🔥 Staking. Proof-of-Stake consensus enables users to participate in staking, an activity that benefits them and the blockchain as a whole. By design, Polkadot rewards DOT token holders who play by the rules.

Is Polkadot a good investment?

There is no one-size-fits-all answer to this question. Whether or not you think DOT is a good investment depends on whether you think it will rise, and if so, by how much and how soon. Since cryptocurrencies are very volatile users should conduct their own research.

Polkadot is a unique asset that has quickly gained popularity in the cryptosphere. It uses revolutionary technology to further decentralize the blockchain and enable the creation of new circuits.

Polkadot has distinguished itself by creating cross-chain functions to seamlessly connect different blockchains. Future projects and the use of Polkadot will ultimately determine the price.

Polkadot is a strong force in the crypto world and has limitless potential. 💪

Polkadot in the Market Today

Polkadot is currently trading at $7.87 which is about 23% over its recent lows of $6.35 from just two weeks ago. As with most cryptocurrencies, these are the lows that have re-visited levels of December 2020.

With the price being just over the immediate support level of $7.82, DOT will want to climb to its first major resistance of $8.45 to really cement in bullish momentum and rise higher. If the market as a whole has indeed seen its bottom, then we should continue to see upwards momentum.

But of course this will be subject to how Bitcoin reacts to the global macroeconomy. If we are to see the opposite and price break down lower, the whole number support level of $7.00 will be what many traders will be keeping a close eye on. Eyes will also be on the ascending triangle that has formed as you can also in our chart below, to see which way price will breakout! 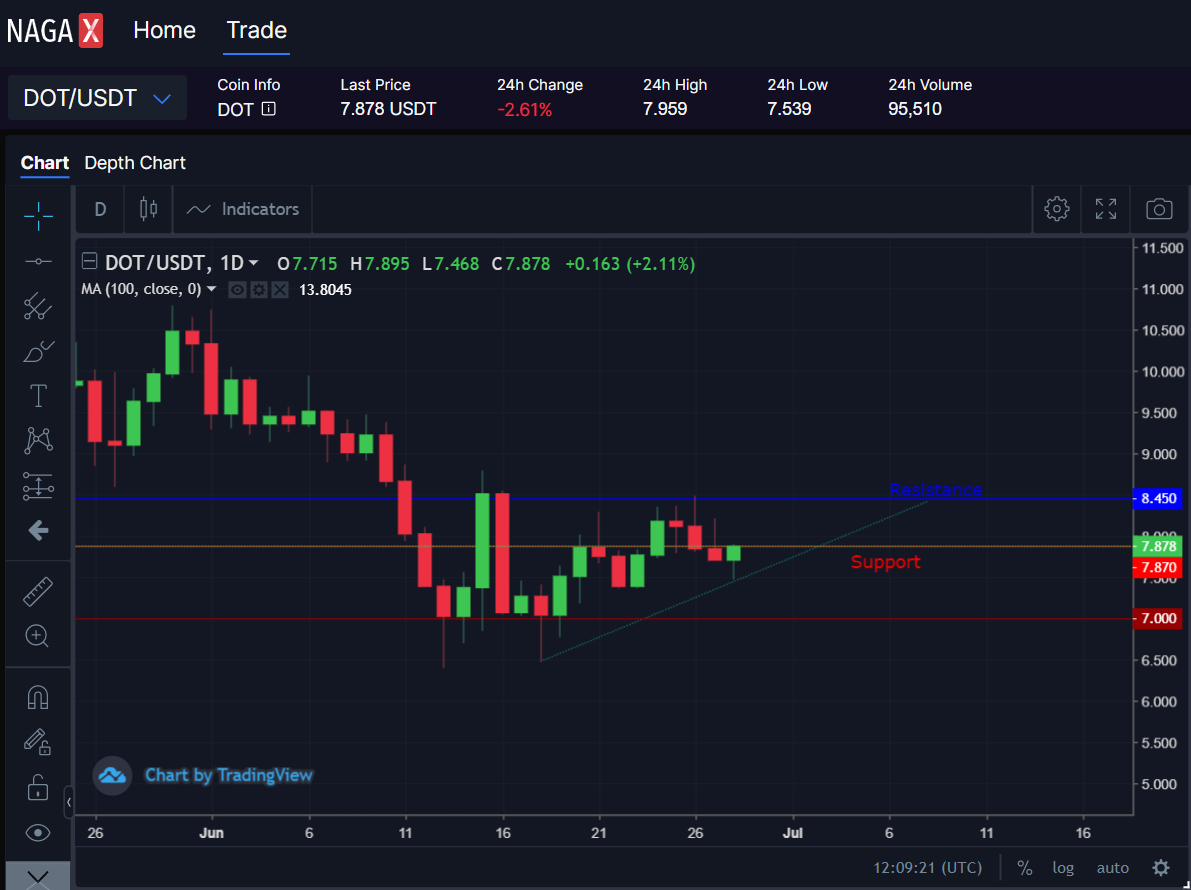 Despite the arrival of crypto winter, many investors believe there is plenty of room for future growth in the cryptocurrency market, especially when it comes to Polkadot. ⚡

With NAGAX's easy-to-use features, you can invest in crypto assets with ease. To buy $DOT on NAGAX, follow these three steps:

When it comes to buying crypto, you have a lot of options. You can directly purchase $DOT with a credit/debit card or other cryptocurrencies (USDT, BTC, ETH) in the NAGAX Wallet. To learn more about buying crypto at NAGAX, please click here.

Polkadot's growth in popularity and profits has been staggering since its launch in May 2020. It has since become one of the top 15 cryptocurrencies by market capitalization, according to CoinMarketCap. Polkadot connects blockchains to each other. Polkadot is not a single token, but a growing collection of interconnected blockchains. Polkadot could become a key component of the next-generation Web3 architecture.

An Insight into Inflation and How it Moves the Crypto Market