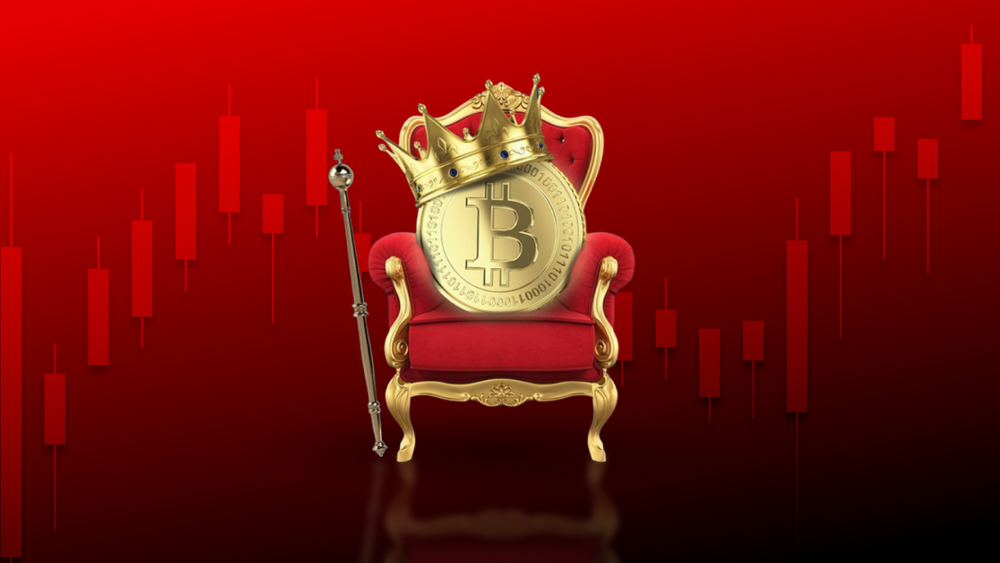 🏰 Historically, exclusive clubs have existed for centuries with one of the first-ever recorded founded in London in 1693, Mrs. White's Chocolate Shop. These clubs have appealed to people over the eons, mainly due to one’s desire and goal to be a part of something exclusive 🤴, meaning something hard to attain and therefore benefitting from; either in terms of making sought-after contacts in social circles 🍻 and/or making bank 💰!

Thus, it was only a matter of time before some sort of ‘exclusive club’ would be attached to the crypto space. One that became popularised in a big way since 2017 was a club for Bitcoin known under a variety of names, with the most popular being 🎩 “The 21 Million Club”. Although, with Bitcoin getting to all-time highs of +$60k 📈, this club almost became a myth 🌫️. Well, till now! And as prices stabilise, or even drop more, murmurs of this elite group will surely resurface! (Watch this 👀 space!)

This 21 Million Club is only accessible to those 🎟️ who are fortunate enough to own 1 whole Bitcoin ₿ (otherwise known as being a wholecoiner), with each one costing around $20,000 at the time of writing. Bear in mind that membership to this club is purely a symbolic status and there is no badge 📌 to pin on your shirt, magic handshake 🤝, ancient rituals 🗣️, or venue to gather at 🏯. Well, as far as we know! 🙄

So why is this so-called meta-club if you will, so exclusive? Aside from the financial 💲 requirement that is.

The reason is, that there will only ever be just less than 21 million bitcoins 🤖 in existence (20,999,987.5769 to be exact), with the last coins to be minted around the year 2140. However, if you factor in all the bitcoins that have been lost 🧭 forever via misspelt addresses, lost, damaged hardware wallets, or stolen funds; the actual number of coins in existence is considerably smaller. Some have even estimated that almost 4 million bitcoins have been lost out of the 19 million currently circulating in the market. 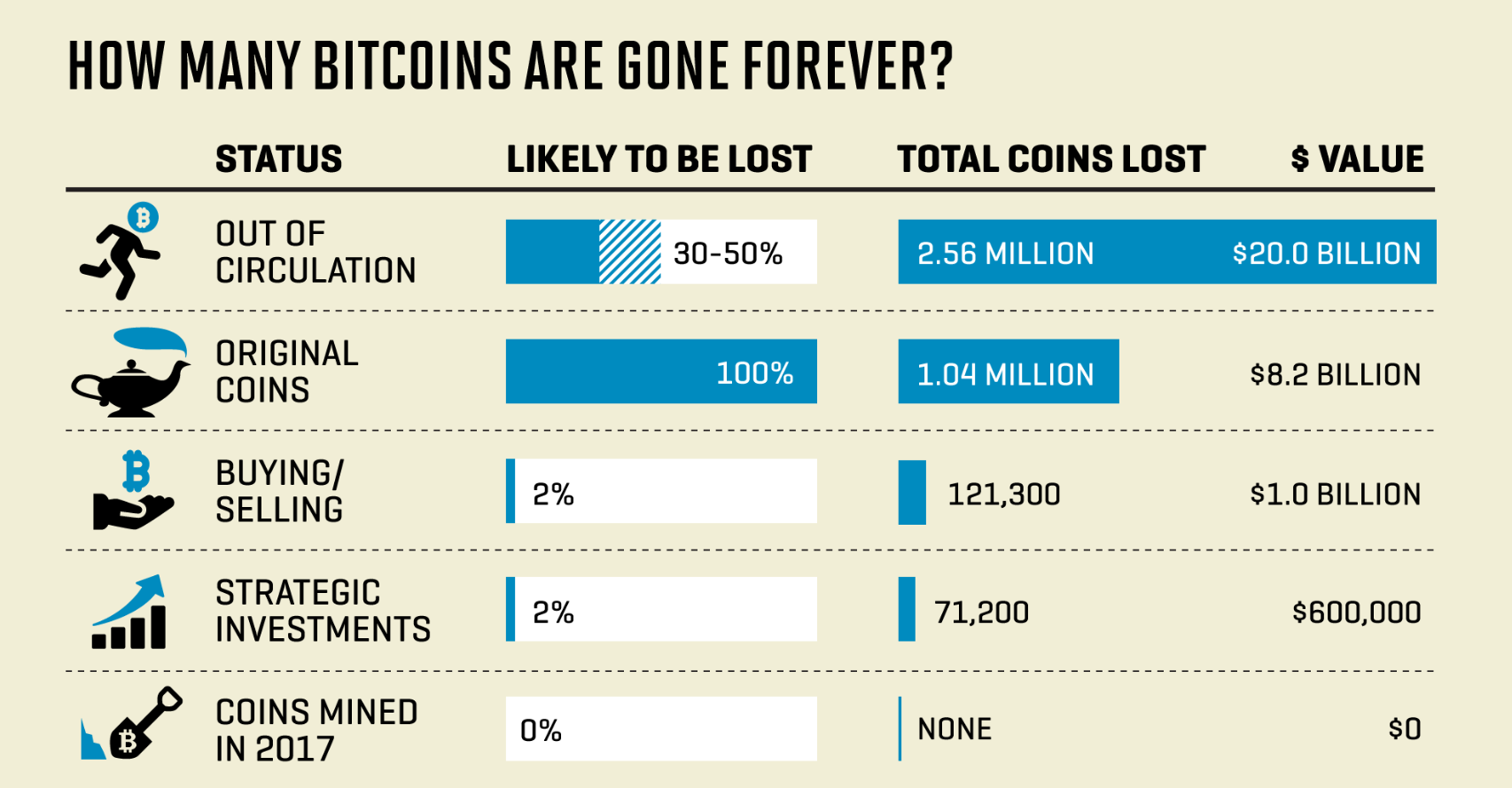 The table above shows how many bitcoins are gone out of existence forever.

What else makes this status exclusive?

Well, we first have to take into account some of the 🐋 ‘Whale’ addresses. Starting with ‘original coins’ as listed in the image above, which is of the ‘father’ 🕺 of Bitcoin, Satoshi Nakamoto. This is the pseudonym given to the person or group behind the creation of Bitcoin. Nakamoto holds just over 1 million bitcoins, where there is speculation that they will never be spent! We must also factor in that there are many other 🐋 whale wallets to take into account, where massive amounts of bitcoins are held by individuals and/or institutions. Not to mention all the fractional accounts where plenty of people hold less than one bitcoin (known as ‘Satoshis’) which further increases the difficulty for the possibility of becoming a member of this so-called 🎩 club. Therefore, in reality, the number of people who can gain access to this 21 Million Club is actually a LOT less than 21 million people, making it truly an exclusive club! In fact, it is speculated that the number of possible members of the club are estimated to be around 800,000 people only! 🏅 And when compared to the population of the world currently which is around 7.7 billion, it becomes arguably one of the most exclusive clubs to belong to 😏!

Want to level up further?

If all that is not enough to entice you 😳, there's another even more exclusive group called the ‘One in A Million Club’. To join, all you need to own is 21 Bitcoins at a cost of $420,000, or more at the time of writing! Now that would be something, wouldn't it? 🤩 So what is all the fuss about then?

Well, in case you haven't noticed…Bitcoin is currently down 🔻 about 70% from its all-time high of almost $70,000! A lot of hopes and dreams ☁️ at that point in time for many new investors to ever own 1 BTC and join the elite group was simply a far-fetched dream and only for the very wealthy 🤵🧐.

Since the kick-off of the bear market 🐾 and as prices started to decline fast 📉, many were dollar-cost averaging; buying more at cheaper prices to average in their own buy-in price! Now, thanks to ⛓️ on-chain data from companies like glassnode, we can see that the number of addresses holding more than 1 Bitcoin is at the highest 🔝 it's ever been!

On-chain data from Glassnode shows the number of addresses holding at least 1 BTC at all-time highs.

This just goes to show that there is still an ever-growing interest in Bitcoin, despite its 70% drawdown. Increasingly so! In fact, as the chart above shows, the lower the price gets - the more people/addresses achieve that status of joining 🎟️ The 21 Million Club! Meaning that as the price has declined, more and more people have been able to afford 1 whole Bitcoin. Sometimes, opportunity arises through patience! 😌 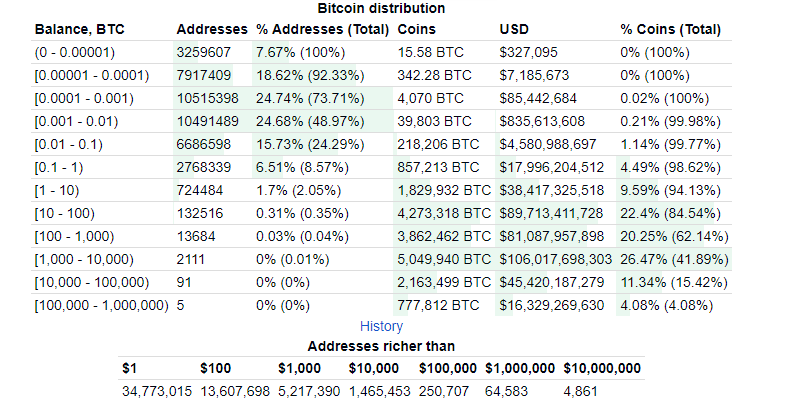 🕵️‍♂️ As you can see from the above table, there are now 724,484 addresses that have at least 1 BTC which is only 1.7% of all addresses out there. It is equally important to note that one address does not necessarily equal one person, but the figures are staggering nonetheless!

🔎 Here are some further stats that put the whole thing into perspective: only about 6.5% of all Bitcoiner’s own more than 0.1 BTC and there are only around 2,111 wallets in the world that hold more than 1,000 coins.

When it comes to the uber rich, there are only around 90 wallets that have more than 10,000 bitcoins in them ✨.

👉 If you want to take a look at the current Bitcoin ‘Rich List’ above, then you can see the top 100 wealthiest wallets here.

So what does this all mean?

Well, in short, the “21 Million Club” is more of a 🙌 symbolic status than an actual physical club you join. However, the ideology behind this is that there are approximately 51 million ‘millionaires’ in the world and only a potential of 21 million Bitcoins that will ever exist (far less as we explained above). The idea here is to own at least one of the ‘21 million’ Bitcoins to be in circulation, and get ahead of the rest of the millionaires 👔 in the world as there will not be enough to go around!

At the end of the day, simple economics tells us the rarer 💎 an item is, the higher ⤴️ its value (mostly). Rising demand in the face of limited supply makes for sky-high prices. And, there’s only so much of the oldest cryptocurrency in the world, Bitcoin, to go around.

So, with all that being said, more and more people are slowly achieving their goals of owning 1 BTC, joining this 🎩 elitist group. And as price has dropped significantly from the start of the year, attaining this goal is getting far far easier.

❓ Are you part of the 21 million club? Or are you on the way? 👉 Wherever you stand, read our awesome blog on the ‘top 5 reasons to be on NAGAX’!

An Insight into Inflation and How it Moves the Crypto Market