The news everyone is watching these days, Elon Musk and Twitter! Let’s dive into the latest with this avid tweet and crypto lover.

It Started with a Piece of the Twitter Pie

On April 4th, 2022 Elon Musk purchased 9.2% of Twitter in stocks. Making the social media company jump nearly 22% in a few hours. After the initial purchase, it is believed that Musk would be a key decision-maker in the company, but after Dorsey came out on Twitter saying that although Musk has a seat at the table, removing ads is not in the future of TWTR as Musk wanted.

Elon Musk took to Twitter hours after the purchase, posting a poll asking followers if they want an edit button; most likely another intention of what Elon envisioned for change after the 9% purchase.

The hefty purchase made Elon the largest shareholder of Twitter, passing even the famous Jack Dorsey. After getting a taste of Twitter, Musk seemed to want the whole pie as a seat at the table, but not a key decision-maker was not to his liking.

The Securities and Exchange Commission record that Musk tweeted with his final offer shed light on the true nature of how Elon is really not sure if he will gain control or not. The record states through a voice script from the genius himself, “I have moved straight to the end” and “It's a high price and your shareholders will love it”.

“I am not playing the back-and-forth game”

The offer details the following: • Elon Musk to buy 100% of the company, Twitter • Musk offering $54.20 per share • Musk extending the offer in cash!

Other sources say that Musk claims he is truly not sure if he will be able to acquire the social media company, even after such an attractive offer.

Another key point as to why Elon wants to acquire Twitter is that he believes this social platform is a fundamental right to freedom of speech. Musk writes, “I believe in its potential to be the platform for free speech around the globe, and I believe free speech is a societal imperative for a functioning democracy”. 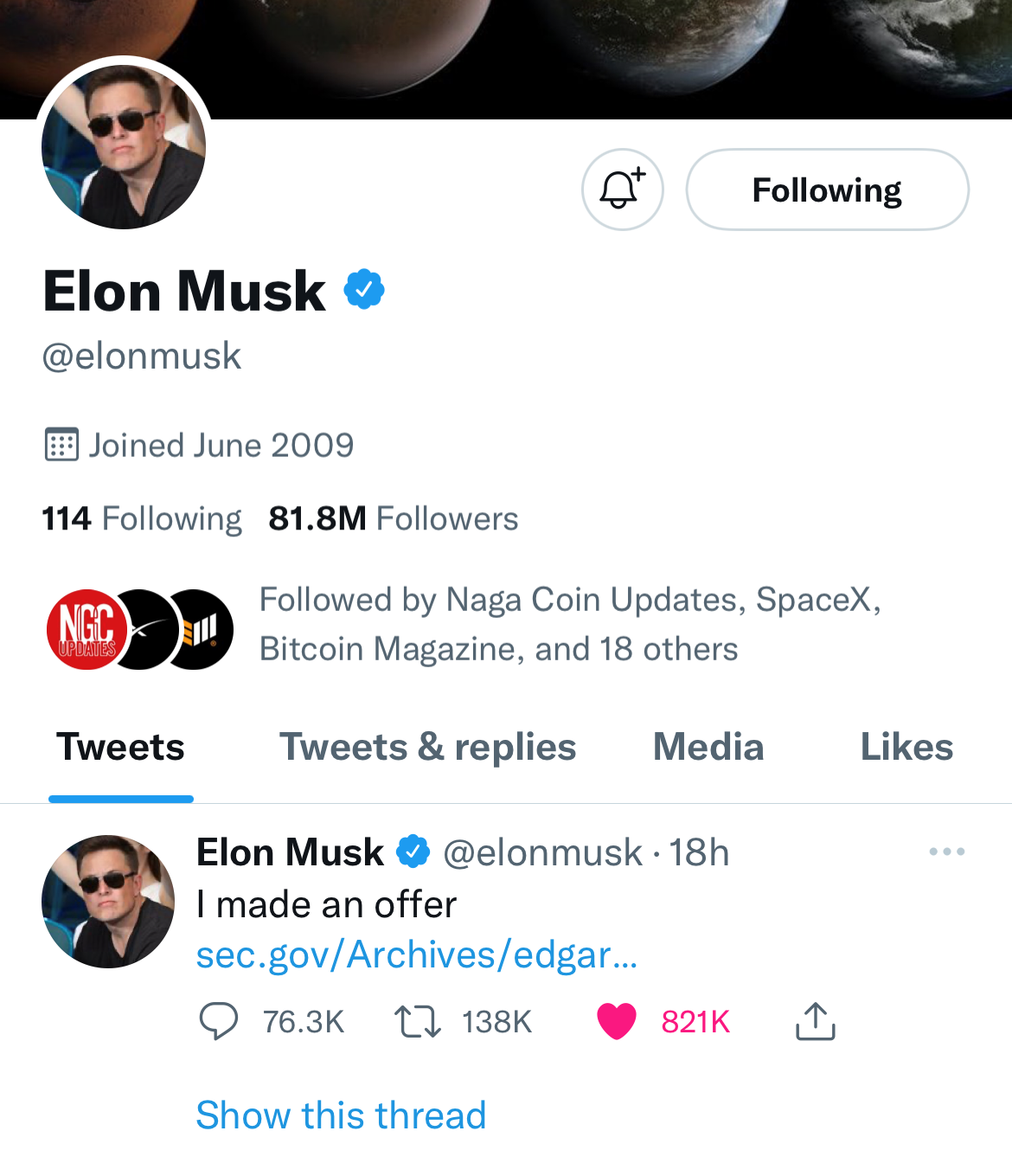 The cash offer (baller!) states that the amount is 54% over the was TWTR was trading at before the volatility began with this love story at the beginning of April.

On April 25, 2022, Elon Musk become the owner of the famous social media platform, Twitter. After a long saga of back-and-forth, and even the board fighting back after the attractive offer above, they have caved with a rather lucrative deal.

Twitter was sold to Musk for a $44B valuation. Shareholders cashing in at about $54.20, a hefty premium of what they owned before the fluctuations began with this long story. Musk’s winning tweet reads, “I hope that even my worst critics remain on Twitter, because that is what free speech means”.

Nobody truly knows what Elon Musk’s motives are for gaining complete control over Twitter. It is speculated that with the daring move, Musk would want to take the company private and transform the business.

Previous tweets also show that Elon wants to make a connection between Twitter and his beloved DOGE Coin, but the only thing that may be confirmed is Elon wishes to use DOGE as a form of payment for the premium version of TWTR.

Musk said recently, “I also want to make Twitter better than ever by enhancing the product with new features, making the algorithms open source to increase trust, defeating the spam bots, and authenticating all humans.". This is one of a few clues where we get into the mind of where Twitter will be heading as the genius spearheads this new privately-held venture.

Where does DOGE stand in this?

The famous meme coin has been on a rollercoaster of a ride since the beginning of the Elon x Twitter journey. Dogecoin saw its monthly peak (so far) on April 6th after the initial 9.2% purchase, hitting a price of $.17 briefly before dropping back down. As we know, social media and the internet play a key role in the fear and greed index as well as one aspect of a determining factor of the price.

Crypto volatility is certainly fueled by online chatter, buzz, and social media reactions. Is this all a hoax or ploy to fuel DOGE off the ground even more?

Risk Warning: Cryptocurrencies are highly volatile and trading can result in the loss of your invested funds. Before investing you should be aware that cryptocurrencies may not be suitable for all investors. You should therefore carefully consider whether trading or holding digital assets is suitable for you in light of your financial condition and not invest money that you can not afford to lose