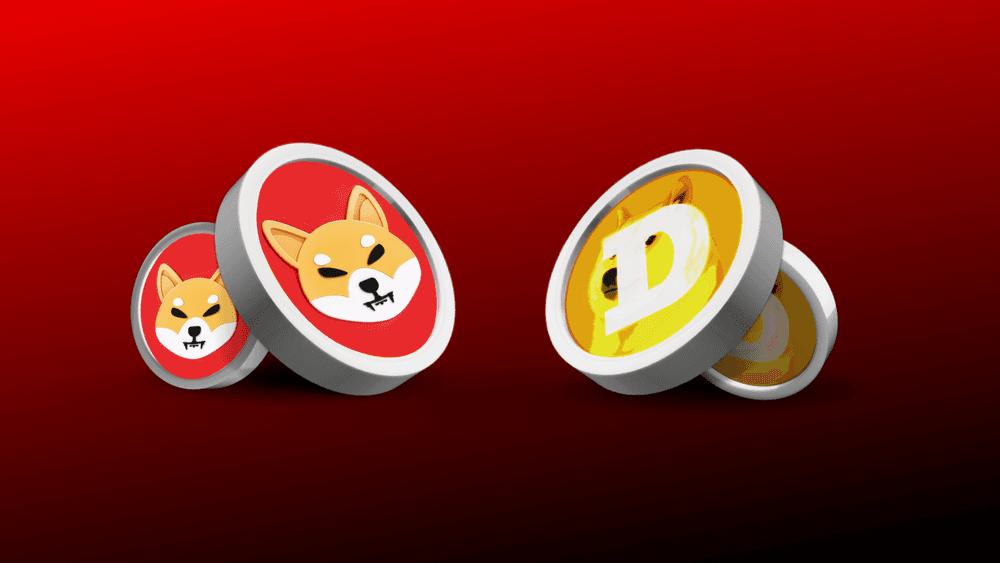 Dogecoin (DOGE) and Shiba Inu (SHIB) are both known as the leading dog-themed 🐕 meme tokens which are both in the top 20 of the biggest cryptocurrencies, as seen on CoinMarketCap.

Usually, meme tokens are not known for having much value 💲 when it comes to utility 🔧, but as general sentiment has changed over time surrounding meme tokens, these two projects have experienced large growth 📈 and success. But who comes out on top in this crypto dogfight? Let's first look at each project separately:

Dogecoin entered the cryptocurrency space in 2013 as a joke 😹 that was based on a Shiba Inu meme (the dog breed 🐕, not the other crypto) that was trawling the web at the time. It was formed by Billy Marcus and Jackson Palmer and created to mock crypto noobs; investors who didn't understand what they were investing in. As successful memes do, it rapidly grew a big following but it didn't have much use or utility behind it to prove its value within the crypto space.

Dogecoin really blew up 💥 in popularity in 2020 thanks to Twitter 🐤 and of course, Elon Musk. With his tweets and play-on-words, this saw DOGE pump to record highs of 12,000% 😮 by mid-2021 and being labelled as “the Dogefather”.

Since then, DOGE’s adoption continues to grow, regardless of the current state of the markets and many large corporations even accept Dogecoin as a form of payment! Once the markets return to a bullish 📈 market, Dogecoin will have a good chance to perform well once again.

Shiba Inu (SHIB) launched 🚀 into the market in August 2020 as the Ethereum-based rival to the original pooch themed 🐕 meme token DOGE, and in just 15 months it was one of the best performing cryptocurrencies recorded to date - increasing in value by 🤯 46 million percent! Taking into account today’s market conditions, SHIB is down 🔻 by about 89% since its October 2021 highs.

Shiba Inu differentiated itself from DOGE by providing actual use cases 🛠️ such as a decentralised exchange, a recently launched Metaverse, and a layer-2 solution to scale and cut down transaction fees. Thus dubbed ‘The Doge Killer’ 🔪🐕.

Just like Dogecoin, SHIB is trading at big lows 📉 right now during this current bear market. However, despite this, the Shiba Inu ecosystem is growing at a fast pace as well as adopting for SHIB payments 💸 which leads to its potential to really rebound well, once the bear market is over!

What’s the connection between the two meme coins?

To proceed to differentiate between the two canines 🐕🐩, we will outline the similarities and differences between them below. But to summarise, there is no actual link 🔗 between the two coins. They are both built on different networks and they are both essentially competitors in the space, each of them providing its own use case.

Other than the obvious being they are both dog and meme-based, there are three main similarities that connect these coins that are seen less frequently in the crypto space.

Apart from these two being animal-based competitors and sitting alongside the biggest cryptos based on market cap, they do have their differences!

As we have mentioned above, both of these cryptocurrencies have great communities 🧍🧍‍♀️🧍‍♂️ behind them and each has their own use cases. They are also both, amongst the best meme coins to bet on long term also.

Many investors and traders are wondering where experts predict 🔮 Shiba Inu will go next or how high ⬆️ can Dogecoin actually go, but the fact is that no one can say for certain. Each investor must decide for themselves which of the two is better suited to their trading and investment needs and enter the market accordingly. However, in terms of performance, utility, and gains; odds are in favour of SHIB to be the winner of the two - due to its deflationary tokenomics favouring long-term value growth.

If you’d like to onboard DOGE or SHIBA, you can do so securely and conveniently through NAGAX today!

Risk Warning: Cryptocurrencies are highly volatile and trading can result in loss of your invested funds. Before investing you should be aware that cryptocurrencies may not be suitable for all investors. You should therefore carefully consider whether trading or holding digital assets is suitable for you in light of your financial condition and not invest money that you can not afford to lose.