🌐 Crypto markets are finding a new range as of the last couple of days as Bitcoin briefly broke above $24K ⏫ two days ago. However, the bullish buzz lasted only a couple of hours after the resistance level proved its mark by not showing a retest to make a further move up higher. Ethereum is however, as of writing, testing its previous highs, showing its eagerness to break through more than Bitcoin at the moment. As for the equity markets 📊, we’ve seen growth in the last 24 hours, but not as much robust growth as crypto has done as of late. Stocks have also found a fair even playing field lately after better-than-expected earnings reports from a number of the major brands such as Tesla and Netflix. Finally, the DXY is still in the same range that it has been in for the last few days.

Lets see how all this affects the market, and more! 👇

The largest crypto by market cap, Bitcoin (BTC) is currently valued at over $23,160 as of writing, 📉 down about 1.3% in the last 24 hours. BTC closed yesterday for its second day in a row in the red 🔴. This breather for Bitcoin has followed from a previous week’s worth of gains that we haven't seen since March, climbing all the way up 📈 to over $24,000.

📉 Since BTC’s recent decline in the last day or so, it seems to be that it is finding itself in a new range as you can see in our NAGAX chart below 👇. We have an immediate support of $22,540 and a resistance of $23,453 at the moment and a higher resistance point of $24,270 (our recent high). 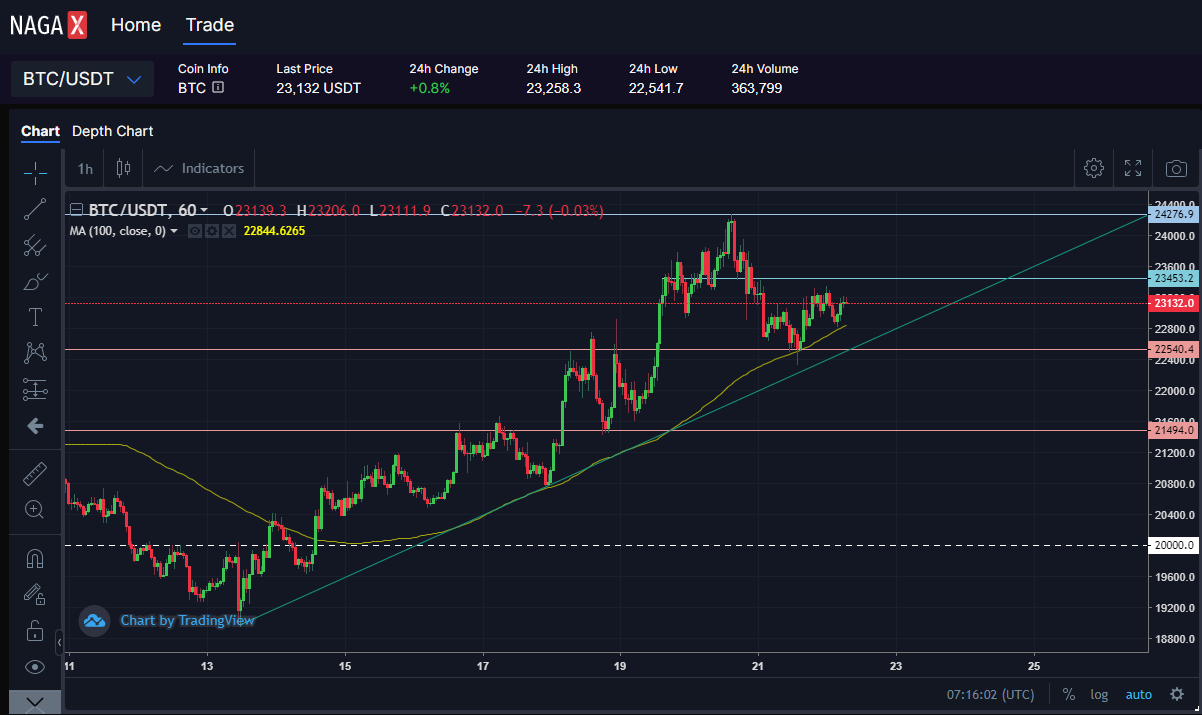 The 1-hour BTC/USDT chart shows that although BTC seems to be taking a breather, zooming out still shows optimism in the markets.

🕵 We can also see by studying the 1-hour charts as above, that we are still keeping to the 100-day moving average, seeing the candles bounce off of it twice just in the last 24 hours. So although Bitcoin has been subjected to some negative news as of late, as we said yesterday, zooming out gives us a more positive perspective 👍 to the general sentiment. Of course, we have a big week next week as the Fed is likely to announce a 75-basis-point increase in interest rates which will affect the global markets in general!

❗ So, making any assumptions that the bear market has fully ended and that we have seen the Bitcoin bottom 🍑 is impossible and reckless to say; because as we have constantly mentioned before, the crypto markets are under all sorts of pressures and influences, and one of them in particular is the rise of inflation and impending recession. But can Bitcoin regain its original narrative as the ideal hedge against inflation? Time will tell! ⏳

🎬 Did you watch our video yesterday for the latest in crypto market analysis? I go into more detail as to what we could expect to see with Bitcoin, Ethereum, and the general markets! Don't forget to subscribe!

We will certainly be starting off with the second largest crypto 🥈 by market cap Ethereum (ETH) today as it is currently still performing very well in comparison to its counterpart, Bitcoin! 🟢 ETH is currently up over 7% in the last 24 hours, currently valued at just shy of $1600 - and is at the point of resistance of its recent highs of approximately $1620. It has, of course, kept above the moving average just like Bitcoin has, but it seems like it's trying to push and break out even higher! 😮

As for the rest of the altcoin market, we are seeing green 🟢 all across the board, but the standouts to look at that have performed the best in the last 24 hours have been ApeCoin (APE), currently priced in at over $6.7 with a 16% change in price and Ethereum Classic (ETC) following similar chart movements to ETH but showing an almost 13% price increase!

💹 As for the equity markets, we saw them gain in value on yesterday's close. The tech-heavy Nasdaq increased by another 1.3% and the S&P 500 gained 0.99% respectively. We also saw a number of major brands like Tesla and Netflix stocks showing better-than-expected earnings reports!

💸 Bias seems to be easing mildly as some investors believe that inflation may soon be slowing in pace without having the economy plunge into recession. This is because some have been encouraged by reports that the Fed would raise the interest rate 75 basis points instead of the more harsh 100-point hike.

👀 Yesterday, we saw reports showing jobless claims 📋 in the U.S. has reached an eight-month high after data showed that the number of Americans enrolling for unemployment benefits went up for a third week in a row last week, offering more evidence of economic weakening.

📅 Today, it is all about the PMI reports from the US, Canada, Eurozone, UK, Japan and Australia. The PMI is basically a leading indicator 🥇 of economic health as businesses react quickly to market conditions, and their purchasing managers hold the most current and relevant insight into the company's view of the economy.