From Jungle to the Moon! Is the ‘Otherside’ the Biggest Mint in History? A monumental moment for the NFT and digital asset world occurred over the weekend! The well-known Yuga Labs finally drop the ‘Otherdeed for Otherside” NFT collection after months of teasing.

Continue reading to get the latest in this burning drop (literally).

The Launch: ‘Otherdeed for Otherside’

Yuga Labs broke the barriers of the crypto universe once again by minting arguably the biggest NFT collection in history. Dropped on the Ethereum blockchain, the Otherside was a sale of virtual land in the controversial new digital world.

Those who already owned the popular Bored Apes or Mutant Apes NFTs were given the land deeds already to this new world. The breakdown of the launch was as follows:

• 15% Developers - 15,000 to Yuga and other project developers helping to create Otherside

On the official Otherside site, it reads, “Otherside is a gamified, interoperable metaverse currently under development. The game blends mechanics from massively multiplayer online role-playing games (MMORPGs) and web3-enabled virtual worlds. Think of it as a meta RPG where the players own the world, your NFTs can become playable characters, and thousands can play together in real time”. Many involved in the digital space of gamification, P2E, and crypto investing suggest that the Otherside is truly game-changing in the fact that it fuses a world of reality and virtual to become one.

The launch in fact drove so much traffic that it caused a series of system-breaking failures. Some crypto-heads even joking about it. 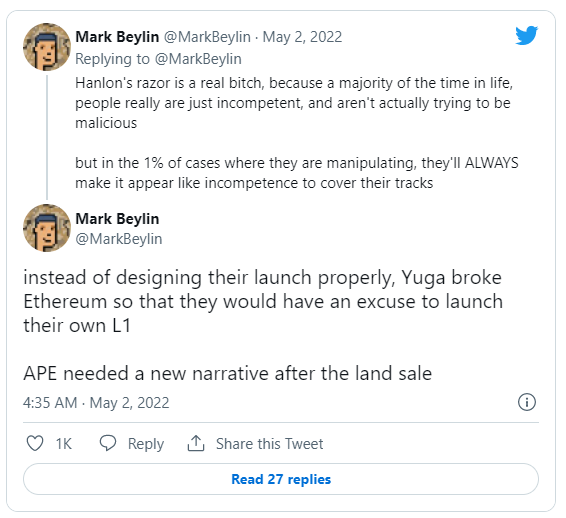 What is the Otherdeed for Otherside

The Otherdeed is the key to owning land in the Otherside. Think of it as a new metaverse where gamification, NFTs, and a whole new world is created.

It officially states that currently, the Otherside will have a total of 200,000 Otherdees and later have another 100,000 rewarded exclusively to, “voyagers” who contribute to the development of the Otherside project as claimed.

Staying afloat as an NFT project in the ecosystem relies heavily on the ability to innovate and expand. The Otherside is Yuga Labs’ take on the metaverse. It is a virtual world consisting of 200,000 land plots that can be bought, owned and sold as NFTs.

The Burn is Real

The Otherside metaverse project sold out all 55,000 NFTs within three hours of going public. As previously reported, only ApeCoin cryptocurrency was accepted during the auction. The demand was so high that the activity associated with these transactions interfered with Ethereum’s blockchain and dramatically increased its transaction fees. Some users had to pay 2.6 ETH gas fees, valued at about $7400.

In a tweet, Yuga Labs said that it intends to reimburse those who paid the gas fee but still failed to purchase an NFT from Otherside. Emphasis was also placed on the fact that the Ape Coin token needs to migrate to its own ecosystem in the future to ensure optimal scalability.

The company has also announced plans to create its own blockchain in which it will transfer all its projects to ensure that network congestion does not recur.

‘See you on the Otherside’?

The Bored Ape Yacht Club is by far the most successful NFT gathering ever. The Otherside land drop is considered by many to be the largest NFT in history, with the greatest 24-hour volume generated.

At the time of publishing, Otherdeeds is trading at a floor price of 3.749 ETH.

Virtual worlds and NFT are taking society to a new level. Soon, humanity will spend most of its time visiting galleries and events, racing and building homes in virtual reality. Digital art, which is based on smart contracts enshrining property rights in blockchain, will help shape and develop the appearance of these spaces. Land in the metaverse will attract increasing public attention, and the craze for a new way of investing - buying virtual real estate - is already gaining momentum.

There will be many developments in the decentralized economy that have yet to be imagined. What we can say is that it will be a much more transparent and direct type of market than what we are used to.

Will you step into the Otherside?

The Most Popular and Best Selling NFT Collections of May 2022

NFT Sneakers and the Move-To-Earn Trend: Get Rewarded While Jogging